Noémi Aubry (Bar le Duc, Francija, 1981) trained in 16mm cinematographic editing after studying theater and cinema at the University of Metz. While doing research for her documentary film, Noémie began her studies in sociology and anthropology and earned her Master’s degree in Visual Anthropology.

Co-creator of the association Ozho Naayé and of L’amorce, a cooperative of editing and diffusion of films ; member of Regarde à Vue, a collective of video artists ; and member of L’abominable, a laboratory of silver gelatin film processing. Concerned with questions of territory, the movement of populations, exile, and identity, she blends methods (Super 8, 16mm, HD) and practices (experimental film, documentary, installation) 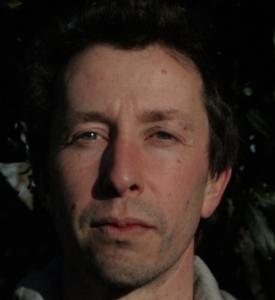 Clément Juillard (Quimper, Francija, 1981) is a director, cameraman, editor, he is a part of several video artist collectives : Les Gardiens du Pont, with filmmaker Patrick Brunie ; Nisa Masa, a network of young European filmmakers, where he has collaborated in the collective making of films in Havre, Vienna, and Instanbul. With the video artist’s collective Regarde à Vue, he directed Su, a documentary about the water in Turkey, and  On ne se laisse pas faire, a documentary about urbanization in Marseille. He regularly conducts audiovisual workshops in the social center of a refugee camp near Bethlehem in Palestine. He is currently working on the documentary Handala, aujourd’hui by Sivan Halevy. He experiments in collective creation and is interested in all levels of the process through exchange and transmission.

Noémie Aubry and Clément Juillard will take part in a discussion Situation of migrants in Europe on Thursday, 18 June 2015, at the Slovenian Cinemateque, right after the screening of film And We Will Throw the Sea Behind You.

In cooperation with French Institute in Slovenia.