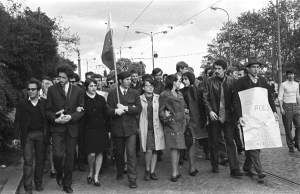 synopsis
The Return of Agnieszka H. is a light and, very often, humorous story about the student years of the most famous Polish female director – Agnieszka Holland, who attended FAMU (The Film and TV School of the Academy of Performing Arts in Prague) in 1966-1971. It was a time of political breakthroughs and the artist actively participated in the Prague Spring events as well as in student protests against so called normalization. In 1970, she ended up in jail for a few weeks. In the film, she goes back to places known in her youth; she also reunites with some friends. In her journey, she is accompanied by two friends from FAMU – a cameraman Andrzej Koszyk and a documentary filmmaker Andrzej Zajączkowski. The reason of her yet another return to Czech Republic was shooting the series “Burning bush” telling the story of events surrounding Jan Palach’s act of self-immolation.

Krystyna Krauze – a graduate of faculty of documentary directing in FAMU. Cooperates with Czech Television as a producer for journalistic programs. Author of the movie Our Vašek – Power of the Powerless. Main character of the movie is Václav Havel and connections with Polish and Czechoslovak opposition.