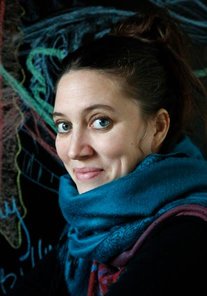 Laetitia Tura works on photographic and audiovisual projects concerning the establishment of  geographical borders as well as the invisibility and the memory of migration experiences. FollowingJnoub   about the border of Southern Lebanon (2001), Linewatch dealing with the border between Mexico and the  United States (2004-2006) and I’m not dead, I’m here on the detention of migrants in Morocco and Melilla  (2007-2012), her newest film Ils me laissent l’exil explores the Spanish republicans’ “retirada” in 1939.  With Hélène Crouzillat she co-directed the feature film The Messengers and the short film Point de Chute   (2012) and is a member of the artist collective Le bar Floreal.photographie.

Discussion with the author will take place after screening of her film Messengers, Monday, 20th June, at 21:15 in Slovenian Cinematheque.

In cooperation with the French Institute in Slovenia.