This is a story of a group of Portuguese migrants, middle-aged men who were deported from the US on the basis of a retrograde law because of their past felony convictions. Most of them have lived in the US for all their lives and considered themselves Americans. This unexpected deportation sends them back to their homeland in the Azores, a seeming paradise in the middle of the Atlantic ocean. Cut off from their families that remained in the US, they recall memories from their childhood and their mother tongue; memories they had forgotten a long time ago. With no expectations of finding a new life, on an island to which they no longer belong, they slowly wilt away in internment centers. Amongst distant memories, abandoned hopes and the physical separation from their loved ones, the paradise island gradually becomes an open sky jail. 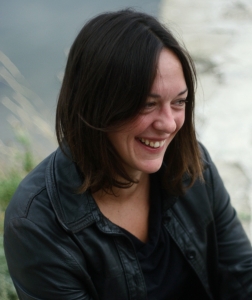 Nathalie Mansoux was born in Paris in 1974. Mansoux finished her Master’s in Ethnology at the University of Paris X – Nanterre in 1999. After an academic year in Lisbon, she moved there permanently in 2001. Since then, she has worked as a director and directing assistant, and now translates subtitled films for the Portuguese Cinematheque – the Museum of Cinema and Portuguese Festivals.
Filmography:Deportado (2012); Palavras Cruzadas (2010); Mujeres y Construccion (co-director, 2009; about the construction of a communitarian center for women in Joal-Fadiouth, Senegal); Via de Acesso (director & producer, 2008; about the destruction process of a suburban neighborhood in Lisbon – TOBIS Award for Best Portuguese Feature Film, IndieLisboa Festival 2008), Mémoires (2005), De Paso por Juchitan (co-director, 2001; a portrait of a Zapotec town in the south-east of Mexico famous for being a matriarchal society – Winner of the Best Documentary, Ovarvídeo festival 2002, Portugal).