about the film
Three young Berliners, recently arrived in Berlin, experience difficulties in their everyday life in Germany. They find the warmth of a family in a theatre group and reveal their deepest emotions in video-letters to their families back in their war-torn or poverty-stricken homelands. 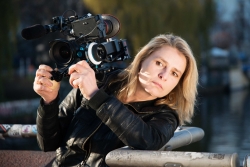 about the author
Susanne Dzeik lives and works in Berlin. She studied cinematography at the filmArche film school association (2006—2010). She has worked on many short films and documentaries, for instance After the Fire (nominated for the Prix Europa 2012 and the German Grimme Price 2013).